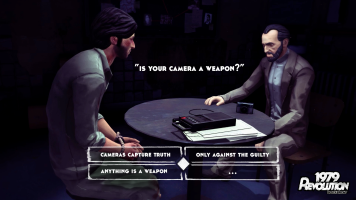 What makes my game unique?

1979 Revolution: Black Friday shows a culture and world that is often marginalized in gaming. In seeking to develop and tell the story of the Iranian Revolution and build gameplay that would allow people to participate and craft their own story, we knew we had to develop the game into an authentic, emotional experience. We took a documentary approach in many ways to the design of the game, letting players inhabit the role of a photographer, and then having the actual primary source photos in the game to compare with. This allowed us to develop a branching narrative storyline that lets you play the role of a revolutionary through your own moral complexity. In doing so, we’ve relied on the “stories” of the Revolution to build a database of actual resources that were put into the game and can continue to educate players about the background of this world.


Why do you think you will win the Grand Prix this year?

The honor of winning the Grand Prix would be great, and I think it would show that the marginalized cultures and developers of the world all have a shot at this spotlight. The world today needs more empathy and webs of connection, and gaming is the ultimate immersive, identifying medium. Through this game and other games like this, people are given the opportunity to witness a world they know very little about, and develop more understanding and appreciation for cultures that can feel very foreign and different at times. 1979 Revolution: Black Friday is ultimately a humanizing game. It takes the best parts of storytelling and gameplay to create a powerful, emotional experience on the mobile platform.