Mekorama is a 3D puzzle game where you help a tiny robot stumble home through miniature mechanical dioramas. The game won the Jury’s Honorable Mention. This is an interview with Martin Magni, the game’s creator. 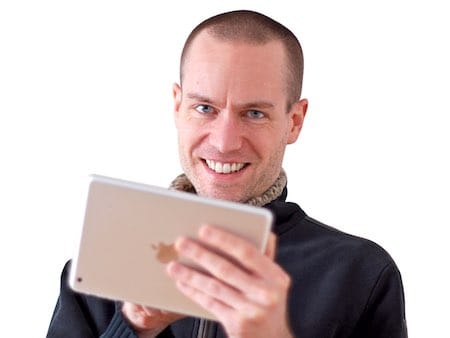 Can you tell us a little about yourself?

I’m Martin Magni, the only game developer in a tiny Swedish town called (roughly translated) “Mountain by the Forest”. I’ve been programming for 25 years, worked with web design, dabbled with music, researched AI, and run a startup. For many years I thought one should focus and become really good at one thing. That didn’t work for me, I guess I’m a jack of all trades. But that’s why I love game development! Code, art, and business must all come together into a coherent whole.

Why did you decide to develop your own games?

Who wouldn’t want that? 😉 The real question is, how do you make it happen? Well, I took the safe route, working for many years, saving up money, cutting costs, until I could afford to quit and do my own thing.

As an indie developer, how do you feel about being honored by the mobile game industry? Tell us about your victory.

It’s my first award, which makes it pretty important to me! I don’t have that much interaction with the rest of the game developer community, so it feels especially good when my work is still noticed and recognized.


What inspired Mekorama’s world and its characters?

The game actually started out as a mashup of Minecraft and GTA,
driving around huge procedurally generated cities built entirely from blocks. The tiny dioramas are all that’s left after adjusting my
ambition to reality. Monument Valley and Captain Toad: Treasure Tracker showed how such small worlds can work in a puzzle game. All I needed was some expressive characters, which I adapted from my previous game, Odd Bot Out.

Mekorama is your third game. Any other coming soon or would you like to join a studio?

I’m plugging away at something. I’d like to say it’s coming soon, but
these things are hard to predict. The dream would be to create my own little studio. But making enough money from mobile indie games to support even a solo developer is difficult.