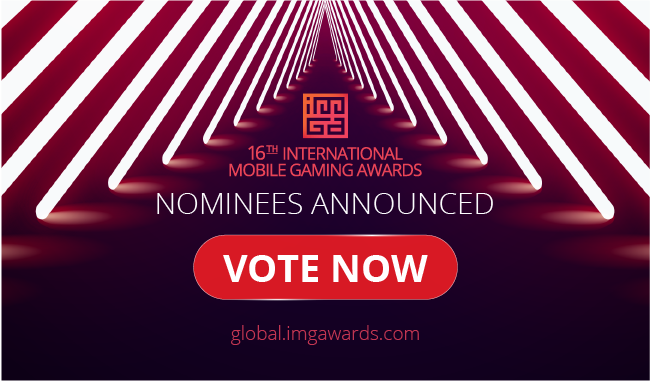 Helsinki, April 15, 2020 – The 16th International Mobile Gaming Awards Global announced today the 127 games nominated for the Grand Prix, as well as those nominated for the 13 additional prizes, including a newly launched prize: Best Game for 5G.

The location, date and time of the Awards Ceremony and the announcement of the winners is yet unknown. Due to the Covid-19 global pandemic, countries around the world are struggling to prevent its spread. “These are difficult times for everyone, everywhere. Our heart goes out to all those who suffer and we hope that our leaders will make the right choices and lead us to a safer future.”, said Patricia J. Lorenzo, Marketing Lead of The 16th IMGA.

More than 500 games were submitted to the 16th IMGA this year. 265 jury members from all over the world were given access to these games and were invited to test, comment and give their verdict. Their verdict is based upon the graphics richness in making the world and characters come to life, compelling storyline, size of these games, and other criteria that utilizes the speed 5G to elevate gameplay. The games that received the highest scores are part of the 127 games nominated.

The public can now vote now at imgawards.com to help their favorite game win the People’s Choice Award.

The nominated games include games from all parts of the world and excel in creativity, innovation, technical excellence, art, sound and design. In this 16th year the IMGA is judging massively multiplayer games, VR games, AR games, games made by the largest studios, small independents and even one-man and one-woman companies.

“The IMGA have been a platform for the latest innovations in mobile gaming and today, we consider 5G as a technology which will have a huge impact on the mobile games of tomorrow, especially for content-rich multiplayer games and VR and AR games. I am very pleased and proud that we can put 5G in the spotlight, thanks to our category sponsor Qualcomm Technologies. Qualcomm brought you 3G and 4G and is now leading the world to 5G.” said Maarten Noyons, Founder of the IMGA.

Created in 2004, the IMGA is the longest standing mobile games award program. With its long history and unique judging process, it has discovered some of the world’s most popular titles in their early days, such as Angry Birds, Badland and Monument Valley. It is the only competition that unites the industry by celebrating excellence and innovation in games. In 2016 the IMGA launched local competitions in Southeast Asia, China and Middle East North Africa, while keeping an international competition.

The 16th IMGA is sponsored by MyGamez, Supercell, The City of Helsinki, Qualcomm and Resolution Games.

Qualcomm Snapdragon is a product of Qualcomm Technologies, Inc. and/or its subsidiaries.

Qualcomm and Snapdragon are trademarks of Qualcomm Incorporated, registered in the United States and other countries.

And the Nominees Are …

The Gardens Between, The Voxel Agents, Australia

What the Golf?, Triband, Denmark