Celebrating a Decade of Angry Birds 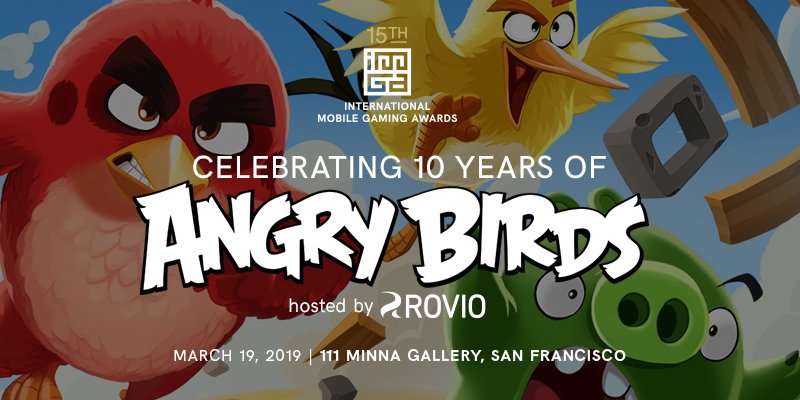 
MARSEILLE, February 12th, 2019 – In 2018 the mobile games industry reached the legal age of 21 years. Growing from zero to 53 Billion US$, according to Newzoo, mobile games popularity is a worldwide phenomenon.


One of the industry’s most spectacular success stories is Angry Birds, which is set to celebrate its official 10th birthday in December. Today Rovio Entertainment and the IMGA announce that they will toast a decade of Angry Birds and the 15th anniversary of the IMGA.


In San Francisco, on 19th March, at an invitation-only event, the IMGA will announce the winners of the 15th IMGA. The ceremony will be followed by the After Party, themed around a 10th anniversary celebration of Angry Birds.


“10 years ago I have played an early build of Angry Birds, a game which was immediately nominated for one of the Awards. I feel fortunate that we were one of the first to play the game before it became a worldwide success. Today I am proud that Rovio will celebrate the 10 years of their success with us.” Says Maarten Noyons, founder of the IMGA.


“For Rovio, this year is about celebrating an incredible decade while simultaneously looking toward a bright future,” says Ville Heijari, CMO of Rovio Entertainment. “We look forward to celebrating the state of the mobile games market with IMGA and raise a toast to its continuing growth.”

The IMGA is the longest standing mobile games award program started in 2004. With its long history and unique judging process, it has recognized some of the world’s most popular titles in their early days. It is the only competition that unites the industry by celebrating excellence and innovation in games. (www.imgawards.com).

Rovio Entertainment Corporation is a global, games-first entertainment company that creates, develops and publishes mobile games which have been downloaded over 4 billion times. The Company is best known for the global Angry Birds brand, which started as a popular mobile game in 2009, and has since evolved from games to various entertainment and consumer products in brand licensing. Today the Company offers multiple mobile games, animations and has produced The Angry Birds Movie, which opened number one in theaters in 50 countries, and the sequel to which is set for theatrical release in 2019. Rovio is headquartered in Finland and the Company’s shares are listed on the main list of the NASDAQ Helsinki stock exchange with the trading code ROVIO. (www.rovio.com)