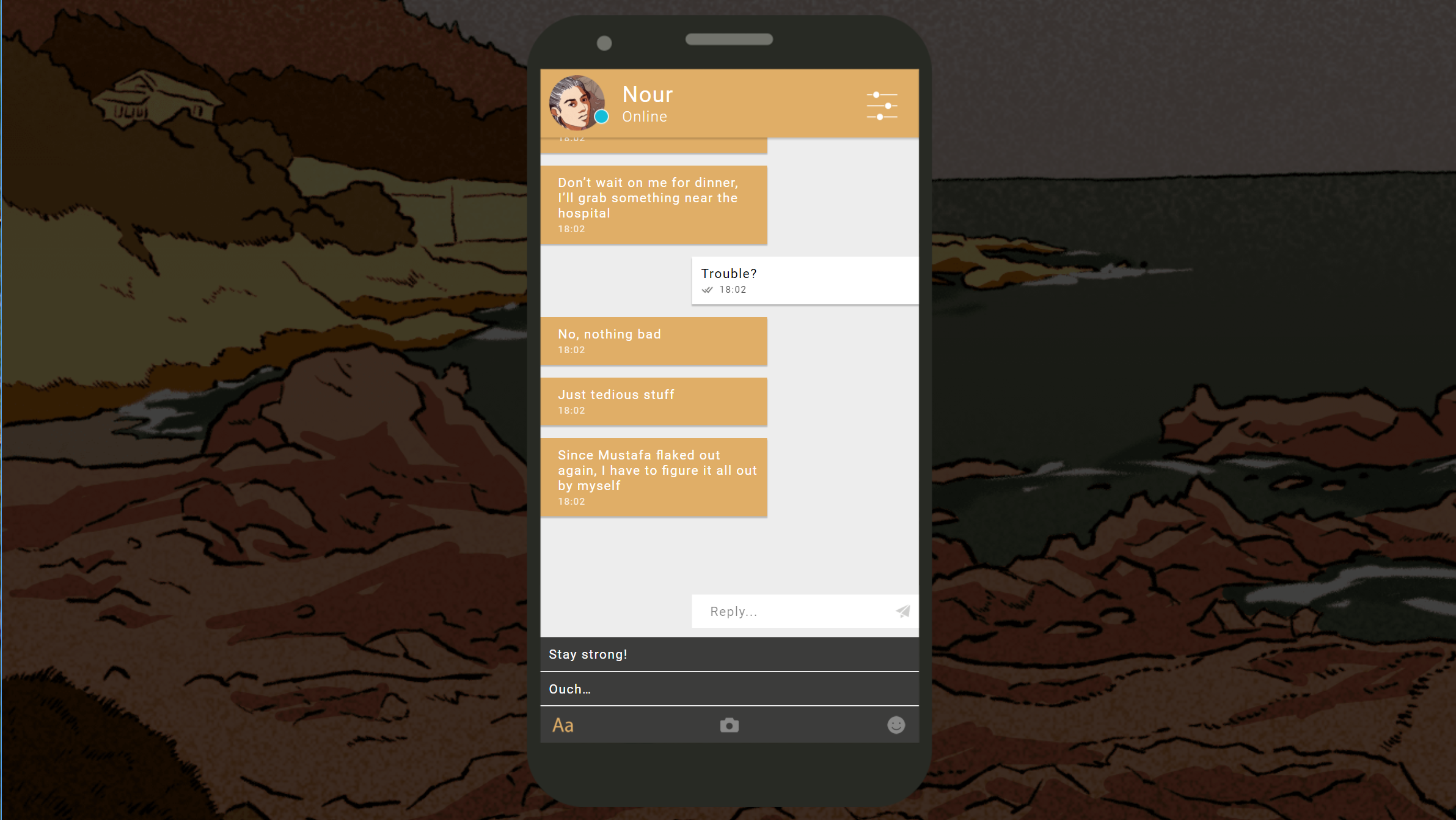 
We have interviewed Florent Maurin on their experience of winning the award, and what the game means to them.


You guys won the Best Meaningful Play award! What is it like and how does it feel to receive such an award, since the game has a certain meaning and sentimental feeling to it?

It’s clear that Bury me, my Love’s topic is a very serious one, and very close to our hearts. When we decided to make a game about a Syrian migrant, we knew we had to be extra cautious not to disrespect the events and people at stake. We documented a lot, and we tried to do our best to be as realistic and believable as possible. I guess that’s part of why the jury thought our game was especially meaningful!
I’m pretty convinced every game is meaningful in its own way – every good game, that is! But the difference with BMML may be that we ventured into an uncharted territory. For many people, games necessarily have to be trivial and fun. I like games like that – I just think they’re not the only genre that should exist. Reality-inspired games are also a valid genre, and the award we got kind of validates that.

What inspired you to make such game?

In late 2015, I ran into an article on French newspaper Le Monde. It was about Dana, a young Syrian woman who had left Damascus to reach Germany – and a safer life. During her whole journey, Dana had kept in touch with her friends and family via a chat application. The message they had exchanged were translated in the article. They felt very close to the discussions I had with my friends: Dana and her folks cracked jokes, sent each other emojis and selfies, and even asked for Arsenal’s latest results! But also, they discussed the compared merits of smugglers or described dreadful situations. This feeling of both familiarity and total otherness made me think this story would be an excellent basis for a game.

What is it that makes your game unique from your perspective?

The fact that we were not reluctant to talk about reality in a game – and with a distance that’s a lot smaller than usual. Real thematics are sometimes evoked in games, but it’s often under a mask of fiction so thick they’re barely recognizable. We decided this camouflage was not mandatory: yes, games were as worthy as films or novels, and yes, they could also tackle real topics with a more direct approach. I think that’s one of the things people might have found interesting with BMML: It’s still a fiction, but the events it takes its roots in are recognizable by everyone who heard a news report in the last 5 years.

Since this really happened in Syria, are the personages (Majd and Nour) based on people you may have met?

Nour definitely is. Thanks to Lucie Soullier, the journalist at Le Monde, we were able to contact Dana, the Syrian woman whose story was told in the article. She very quickly agreed to help us write the story for BMML. As we were asking her lots of questions, we discovered a woman who was brave, daring, independent and free. So naturally, when it came to writing Nour, the game’s main character, Dana was a big influence. Majd was written more in opposition to Nour than to reflect on someone else we knew because we figured this would work well fiction-wise. Ultimately, BMML is a love story, and we liked the idea that in a romantic relationship, love helps overcome differences.

How was the process of making the game? As in, how was the concept developed, the different consequences and was it hard to make the game?

It was hard, obviously, because the topic is a hard one. Before we wrote a single line of the game’s script, we spent 4 months gathering documentation. By reading a lot, watching a lot of documentaries and hearing a lot of testimonies… and as we were doing that, we had a growing feeling that, in front of such a dramatic situation, we had no right to mess things up.
We first made a geographical map of the main routes the migrants take between Syria and Europe, and we used it as a writing game. We knew we had to have passages written in each of the locations we had identified, and so we did. Once we had it all on paper, we gave it to Dana and Lucie, so they could read it all and give us their most honest feedback… then we re-wrote some passage according to their feedback. In parallel, the game’s engine was developed, then the text and images were integrated, and the whole thing was playtested a thousand times… until we were ready to go!

Do you think that your game defines that not all games have to be “fun” to be interesting?

I think it helps indeed! It’s still entertainment, though, as a documentary film still is too. It’s still something that takes you to a place you’re not in – and in this particular case, that’s a good thing you aren’t. But we made a lot of choices to foster the feeling of helplessness the player may feel, and that’s typically what you’d try to avoid when you’re after sheer fun. The fun comes from the sense of control and mastery lots of games gift the player with, and BMML sure doesn’t go down that path.

Are you content with the outcome and reactions on the game?

Absolutely! We had lots of super positive press and were nominated for a fair number of awards. We even won very prestigious ones, the IMGA being among them. But the most important thing, for us, is that Dana and her relatives loved the game. She put so much trust in us and was so helpful during the writing of the game that producing something she’s comfortable with was our main objective and biggest hope.

Was the game also made, to give an insight to this situation? Also for others to empathize with it?

Of course. We are not activists. We do not have a political agenda and are part of no NGO. But we were moved and shocked by the thousands of stories we read on the so-called “migrants crisis”. Stories of people whose humanity was denied, of men and women who were treated like animals or disrespected because they were ill-considered. This is unfair, and it’s unworthy of what Europe stands for. So if our fellow citizens, in France, in the EU, and everywhere else in the world, who are lucky enough not to face migration, get a glimpse at the situation through BMML. Also, if that makes them reconsider how they look at strangers they cross in the street, of course, I’ll be happy.


If you guys haven’t tried the game, we suggest to download it!