(S)haron: I am the co-founder of IMBA Interactive alongside with two other partners, Jeremy and Gwen. Before I started the company, I participated in a summer program held in Boston, jointly developed by Massachusetts Institute of Technology (MIT) and Media Development Authority (MDA) Singapore. In fact, all the three of us went for this program and we met there. I actually began my foray into the creative industries as a fashion designer. I did fashion for a period of time until I was stumped by creative and environmental barriers. It was then that I decided to make a change in my career path to my then second love, music. I quit my job and went back to study at the School of Audio Engineering (SAE).


You could say, from then I never looked back. Never in my mind would I have known being a game audio specialist could be so fun and life-changing. I’ve always liked games, played many console games in my childhood but had left that in the background while I was in the fashion industry.


(J)eremy: I have a much more common story of having beginnings in music. I was an active percussionist since my school days, and I’m still playing till this day. It was just a natural transition from playing music to writing, arranging and producing songs for friends… to creating sounds and noises, and collecting more and more equipment, tools and instruments to create those sounds… and before you know it, you have a studio, and a bunch of like-minded friends striving together to make a living with what we all love to do. 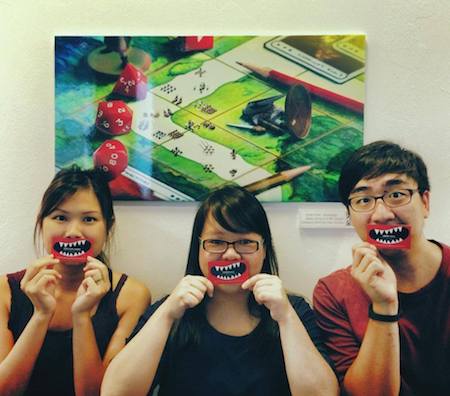 For those who don’t know IMBA Interactive, can you give us one sentence to describe your work?


We are a studio that’s dedicated to making awesome sounding games and interactive media by getting out hands dirty with music composition, production, sound design, foley, voice work and integration into game engines and middleware.


Three games for which you designed the sound won an award, this year. How do you feel about that?


First and foremost, we are overjoyed for our friends, the developers who worked really hard for their games as well. Such recognition is always welcome in the Indie mobile games scene. As the audio team on board with these games, we are of course proud to be working with these developers. But at the same time, it also motivates us internally to keep pushing the boundaries of audio in games.


Why did you chose to create music for video games, and especially for mobile games?


S: Composing for games is really something that I look forward to daily. There’s so much we can do to enhance a player’s experience and great satisfaction comes when you see a player immerse in the game. We don’t just compose for mobile games, but design for all platforms.


J: I’ve always felt that games as a medium are as contemporary as it gets; and by extension as a form of interactive media, it’s where the cutting edge of the possibilities of media are. It’s a nice place where we can explore and apply new technologies and techniques. Things like VR and AR are just the beginning of challenges in the next decade. And adapting music (and sounds) for these new formats is what keeps the excitement and interest going for me.


What is the process of creating music and sounds for games?


We look to be involved as close, and as early as possible with the development team, and follow the project end-to-end as far as the sound aspect of the game goes. Think of us as an “outsourced in-house” team. We strive to have an efficient and professional communication pipeline with our clients, especially when it comes to delivery of assets. However, instead of “asset churning”, it is ideal that we are able to contribute creatively to the project as well. There will usually be 3-main phases that we will go through:

Do you also compose for yourself? What do you listen to?


S: Yes I do, during my free time I compose music that is related to my faith. I listen to all sorts of music, recently I’ve been listening to a lot of R&B.


J: I wouldn’t say I compose FOR myself, but I do have the habit to listen to works that I have recently composed on repeat on my iPod, just so I am completely satisfied with it. In my leisure time, I love listening to Jazz and Fusion genres, and I still enjoy the occasional groovy pop song.


What inspires you in making music for video games? How ideas come?


S: A lot of times, I don’t get any references, I just start with playing a tune or sing a melody that can portray a certain emotion and build on it. There are times when I do a ton of research on the background of the characters or environment before I start. I try to immerse myself with information and concepts that the developers provide before I compose.


But of course, design briefs are not sufficient at times. Developers who come to us very early in their prototyping phase wouldn’t have a final idea of what they want and that’s totally fine because I would get to craft part of their narrative with them, from my perspective of a composer/sound designer. I would start visualizing or writing down what could be the story according to the brief ideas provided. Once I have penned down a concept or a certain emotion I want to portray, I would bounce these ideas with the developers again to see what they think.


When I am stuck, I just start playing something and build on that. Changing up the way I compose or drawing inspiration from randomness is also important for me. Sometimes I start with recording some weird stuff and conceptualize from there. Room for experimentation also sparks more inspiration for me.


J: For myself, I usually start with a bit of research, especially if I am working on a track genre or style that I am not 100% familiar with. It could be some text, videos, or visuals and I’ll try to pick out or create some “audio bites” from there. A musical idea could be the start of a motif, or a specific color may translate to a certain “warm sound”, or sometimes I start off with a specific set of instruments put together, like a “custom ensemble” and limit my composition to this instrument set. It’s sort of like creating rules from no rules and see where it goes from there. 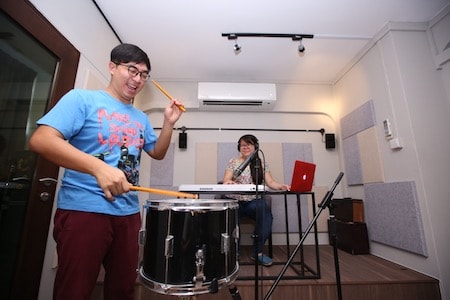 Any new mobile game soundtrack or project coming out in the next months?


We are definitely working on a number of mobile games at any time during the year, and to keep up with the releases, just stay tuned to our Facebook and social media. (fb.com/imbainteractive)


And yes we have a couple of pretty exciting mobile games lined up for next year. A couple of them would come from Taiwan, but it’s still in the making and we will make announcements when the time is right!


S: I can’t emphasize this enough but the game audio industry is really special. The craft is so delicate, we are not just sound designers or composers, there’s really more to it. Being skillful in composing or sound designing doesn’t necessarily mean that you will have a good sounding game.


Another thing I want to point out is that the game audio community is filled with awesome people who constantly share information and intentionally help one another to grow. I remember when I first started out as a game sound designer/ composer, I knew nothing about creating music for games, I emailed a big group of well-known composers that I admired and asked for advice and to my surprise, they replied with kindness, with helpful information and encouragement.


J: Say to the world? Is this my “beauty pageant” moment?? 😛 Well, I guess I’ll borrow a quote from Jim Carrey here: “You can fail at what you don’t want, so you might as well take a chance on doing what you love.” and I’ll add: While you’re at that, remember to love one another.

Well, that’s it. Thanks a lot!