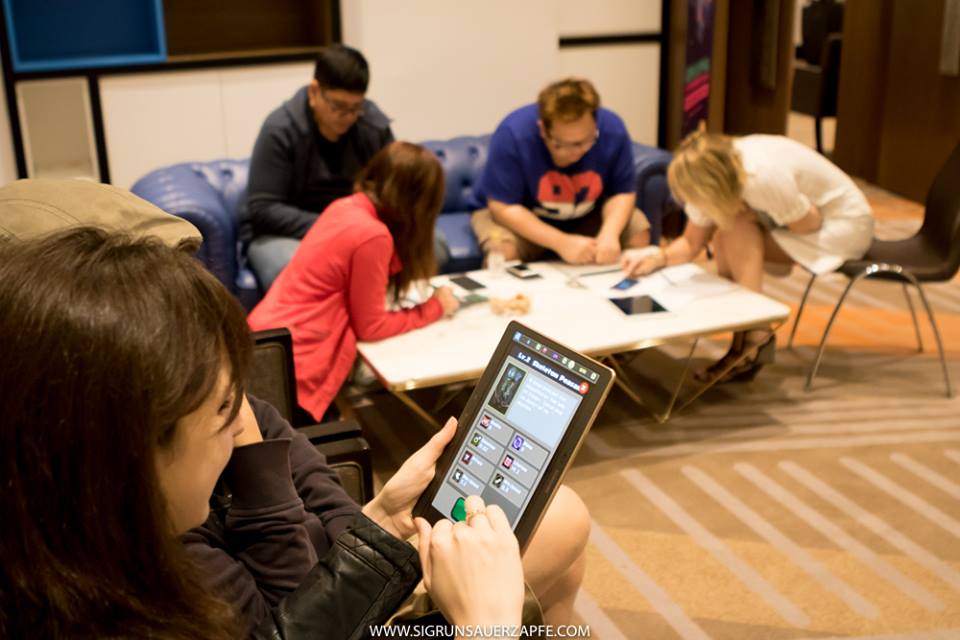 We are pleased to announce the jury line up for the 2nd IMGA SEA. Meet our jury members, those without who nothing would be possible as they have the very important mission of selecting the winners of the IMGA SEA. Every year, we are gathering the best gaming experts to play, play, play, and play!


Ian Gregory has committed the egregious sin of doing poorly in school as a Singaporean. Ian started working young and only returned to his studies at 23, receiving a scholarship at the Nanyang Academy of Fine Arts. In 2010, his second year there, Ian co-founded Witching Hour Studios with some friends. Six years on, Witching Hour has garnered multiple awards and international recognition for their line of Ravenmarkgames and the off-kilter Romans in My Carpet! He is currently working on their latest title, Masquerada: Songs and Shadows. Aside from Witching Hour and industry endeavours, you can find him playing board games, tabletop RPGs and lots of Lego.


Mohammad Fahmi is the Marketing and PR Manager for Toge Productions, and the Former Editor in Chief of Tech in Asia Games. Starting his career as a game programmer at Gameloft Indonesia, he then continue his career in the game industry as a game designer at the same company, before finding his passion in journalism and writing. As someone that spents most of his life, personally and professionally, with video games, he has special interest in games that can play around with the players emotion and empathy.


Febrianto Nur Anwari is the Senior Editor of Duniaku.net, the biggest game and pop culture media in Indonesia. He started his career in game industry as a game journalist since 2008, and was one of the initial members of Duniaku.net since 2011. His biggest interest is local game developer scene. Currently, his mission is to spread the news about Indonesia’s game industry to both local and international game and creative industry’s enthusiast with a brand new site, which is still a part of Duniaku.net’s family, called Gameprime.asia. He believes Indonesian Game industry will advance rapidly and be more well-recognized globally through the development of Game Prime.


Jeremy Ooi is a co-founder of Kaigan Games. A Malaysian based studio that makes narrative games for mobile. He’s been making games professionally and personally for the past 5 years. He was involved in Malaysia’s very first PC point and click game “Hoodwink” and has since worked on several games and gamification projects, culminating to the breakout hit, Sara is Missing. He also freelances as a game journalist, having written for Haogamers.com, Pocket Gamer and cilisos.my. Besides working on games, he is also active in the theatre industry, where he sometimes direct and produce his own indie shows.


Gabby Dizon is the CEO and co-founder of Altitude Games, a Manila-based studio creating original, free-to-play mobile games. He helped pioneer the Philippine game industry as part of the team that released the first Filipino-made game in 2003. Prior to Altitude Games, Gabby was formerly Senior Producer at Boomzap and President of the Game Developers Association of the Philippines. Gabby also helps champion the game development industry in Southeast Asia and is an active member of the Philippine startup community.


Tim Liu Qing is working as Senior Client Partner at Facebook Singapore, managing the key account business in gaming industry. Previously, Tim worked as a senior consultant in some of the leading technology company like Salesforce.com, Tableau software. He has over 5 years in the enterprise software space focused primarily on Business Intelligence, saas application and digital marketing platform. He guides his clients on how to leverage the power of social media platform and latest data analyst technology to achieve global customer acquisition goal.


Oliver Kern is a noted growth hacker and mobile marketing guru and has helped app companies ranging from indies to market giants like Rovio and Wargaming. In his more than 20 years in marketing and advertising he has marketed hundreds of casual, core and MMO games in the online and mobile space.   Currently he serves as Chief Commercial Officer at Nottingham-based Lockwood Publishing, the creator of the virtual 3D world AVAKIN LIFE. Next to that he is board advisor for a number of mobile games companies and mentor at Game Founders.

Langer Lee is the Global Business Director for the Business Development Group in XFLAG, the entertainment arm of mixi inc. and publisher of Monster Strike. Langer is currently spearheading the global strategy in expanding XFLAG’s presence and looks forward to creating and bringing thrilling battle entertainment to everyone around the world.

Janelle Lee has over 10 years experience in Entrepreneurship and Game start-up in US and South-east Asia. She’s leading the business partnership with USA Microsoft Game studio, and producing Armor Valley.