Stugan, developing great games in the middle of the Swedish woods

We took the chance to ask Jana Palm, a few questions about Stugan programme and how she is running this world-class games accelerator in the middle of the Swedish woods!

Why is Stugan’s programme the best option for making / creating a game?


At Stugan the game developers get the chance to completely disconnect from their day-to-day life and get to fully focus on their games for two month. Moreover, they get to spend the whole time with the people with the same mindset like themselves and they get help with their games from mentors who frequently come to visit Stugan. All this strengthens their network and accelerates the development of their games. Additionally, they get a good deal a lot of media attention. Last but not least, they get to spend two months in the middle of the beautiful Swedish nature and draw inspiration from the scenic surroundings. 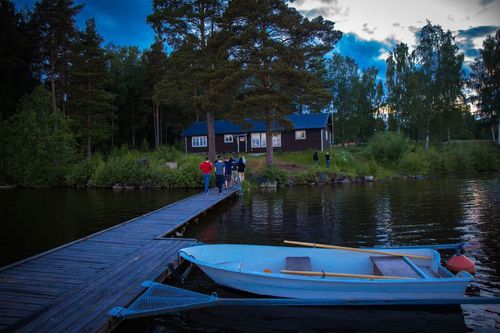 Can you tell us a little bit about yourself and your role at Stugan?


My name is Jana Palm and I am running Stugan, a world-class games accelerator in the middle of the Swedish woods. I have been working here from the beginning and have helped to build this unique project. During the year I work on organizing the summer, and trying to spread the word as much as I can by talking at conferences and universities. When the game developers arrive to Sweden I spent the whole months with them in the cabin in the woods, making sure everything runs smoothly.

I have also been a judge in a few game dev competitions like Indie Prize, Swedish Game Awards and Nordic Game Indie Sensation Award. Being a judge in different competition has also helped to spread the word about Stugan but also it has given me the opportunity to play tons of games that I would probably not come across otherwise


Can you tell us more about the promising participants of this year’s edition?


This year we have 13 teams, 21 people in total (there is one to three people in each team). The “Stuganeers 2016” come from 13 different countries from all around the world. We have a team from New Zealand, South Africa, Brazil, Canada and Sweden, just to name a few. The teams have different background and different experience. Some of them have been making games for many years while some have just finished their studies. We were aiming for this mix in order to create an environment where the teams help each other out, everybody has something to contribute with.

Will Stugan programme always be in Sweden or do you plan to export this concept elsewhere?


Travelling the world we have seen interest in many countries to bring Stugan there. However, at this point we plan to run it just in Sweden.


Can you tell more about the successful games made in Stugan last year and this year?

Last year we had 15 games. One of them was launched in February on iOS and recently on Android as well. The game is called _PRISM and was created by a single person, extremely talented Clint Siu. Another game, Planetoid Pioneers, has been put on Steam early access a few months ago and we are expecting a few more games to be launched later this year or next year.

This year, there are 13 exciting games being created here. Different genres and different platforms. We are looking forward to seeing some of them being launched hopefully already this year and some next year and in the years to come.


We were very happy to welcome IMGA’s CEO Maarten Noyons last year at Stugan and we were also very excited that two games from Stugan 2015 were nominated. We only hope to at least repeat this success in the next IMGA. It is great to see you guys are growing and launching IMGA in different parts of the world, great job and good luck!